Laura Tate is a singer with a heart as big as Texas and a passion for singing that goes back to her childhood in Dallas. Her musical talent took her to Nashville and New York City, before she settled in Los Angeles and added acting on television to her music career. Her repertoire ranges from jazz and blues to rock and country. With the toughness of a torch singer and the tenderness of a lover, Laura sings new life into American standards and popular music while also introducing songs written for her.

In 2021-22, Laura and her band are working on her sixth CD in eight years, a bluesy collection with a double shot of fine New Orleans jazz. "Laura Tate: Live from El Paso," her best-hits collection, stayed at number 1 on the Roots Music Report's Jazzy Blues List for 25 weeks and is currently shortlisted for a 2021 Grammy Award nomination, along with her single "I Need a Man." Each album showcases the many moods of Laura Tate and the talented musicians who make performing fun on stage and in the recording studio.

"I'm thrilled and humbled to be a part of Blue Heart Records and Nola Blue Inc. Looking forward to a new album release in 2022. So excited to be working with the professional and talented team at Blue Heart Records!" 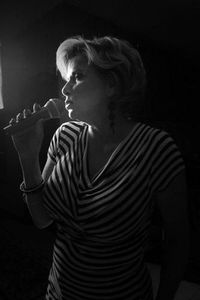 A Night of Music with Laura Tate

Spend the evening as Laura sings her favorite songs accompanied by Jeff Paris on the piano, and local El Paso musicians. You won't want to miss it!